The time has come, unfortunately, for the pointless, annoying, never-ending discussion about the plural of THE R WORD.

Let's take as our starting point  The Speech of Cicero for Aulus Cluentius Habitus: 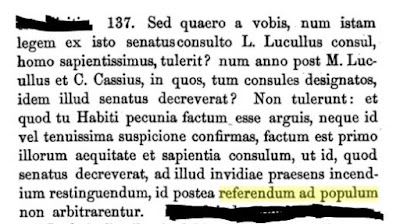 This referendum ad populum ["the putting of a question to the people"] was soon abridged to plain referendum; but the phrase shows that the word was, in Latin, a gerund. Now I'm not going to argue that English has to follow the rules of Latin. That ridiculous notion has long plagued studies of English. But to quote one distance learning site:

Forming the gerund: The gerund is formed much the same way... . All gerunds are considered neuter nouns and there is NO nominative case and NO plural form.

OK, there is no plural of referendum  in Latin; so how do we form it in English? There is little doubt about how plurals are formed in English. In most cases (and I wonder how to quantify that most – hmmm) the rule is simple: add an s. Phonologically it's not quite that simple: dependent on what's being pluralized, you add either /s/ or/z/ or /i:z/ or /ɪz/. But there are quite a few exceptions: sheep/sheep, man/men, ox/oxen, basis/bases...

Then there are foreign borrowings: Latin – medium/media, Greek  – criterion/criteria, Hebrew seraph/seraphim... as many as the language has borrowed, and as many as will be borrowed....This gives many opportunities for linguistic snobbery:


My dear, did you hear that?
"Criterions" – Where did HE go to school?


Naturally, in the face of this, hypercorrect forms such as criterias are common. People think they should use the foreign pluralizer, but  the native one interferes. And sometimes a foreignified version becomes so commonly used that it becomes standardized. This seems to be what has happened to referendum. It wasn't until I started researching for this post that I came across this: 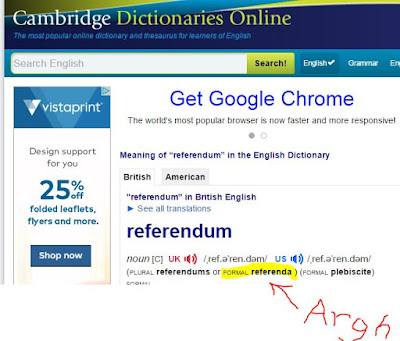 Well as long as I live I'll keep saying referendums. But I'm afraid the feeling that "formal" contexts call for a parade of ignorance is gathering momentum.

I saw a programme in the Les Hommes de l'Ombre series last night, and it reconfirmed my belief. I have referred before to Gaston Dorren's Lingo . It's still on my Guilt Pile, but some day I'll finish it; and I have read the chapter on French, unfortunately called Mummy Dearest. Dorren's point is that the French language always has an eye on its mother, Latin. There are, of course, many Francophones who know no Latin; but his point is about the relation between the spoken and written language. When a French person says, for example, ils aiment, the -nt has no phonemic value. But in writing it resurfaces. Sometimes, one of these Latinate fossils reappears (resounds?) in speech, because of a phonological rule: il est aimable, for example.


Dorren's point could have been more carefully made (that chapter heading, for example). But there is a grain of truth in it:modern pronunciations in many Romance languages hark back to a Latin spelling; elsewhere I have mentioned Italian pronunciations of -ezzo:


...Italian native speakers pronounce mezzo with the voiced affricate /ʣ/ and prezzo with the unvoiced affricate /ʦ/ without – for the most part – knowing the reason: that the one with voicing is derived from MEDIU(M) and the one without voicing from PRETIU(M). Yet I've never heard a mezzo-soprano called (in English) a /meʣəʊ/. Of course I'm not saying the English pronunciation 'should' have the /ʣ/;  it's just interesting that it doesn't.

But French prends la galette, as it were, when it comes to harking back in this way: Latin is never far from the surface of French, and English has no equivalents of Augustan poets like Corneille and Racine. Pope comes close, but his classicism strikes me as more superficial.


Returning to that TV programme, one  of the characters said "Je n'aime pas les référendums". When I heard this I was relieved to learn that French hasn't been infected by the rot of  supposedly formal hypercorrection.

And here are a few more clues: