A little over a year ago I wrote here about words coming and going to and from dictionaries, which – with a few exceptions –  record the current state of [lexical] play. But what makes words come and go out of fashion? I've been thinking of late about two (clusters of) words, with diametrically opposite fortunes in my lifetime. Well, not exactly (symmetrically) opposite. Their rates of change don‘t match. But one goes up and the other goes down.


Things have gone well for icon. Time was when an icon was something you'd associate with Cyrillic script; it was a religious picture:

Its use in that context spawned several related word: iconoclasts (literally the smashers of holy pictures), iconoclasm ...

Then two things happened; one cultural and one technological. The growth of celebrity culture exposed the need for a word for something unique, striking, and representative of its class  – classic, if you'll permit me to use the word IN ITS PROPER SENSE (excuse that little outburst – I know I shouldn't).

The word icon was readily to hand. But a technological breakthrough in the late '60s added its weight to the impetus. Douglas Englebart's Mother Of All Demos, at Menlo Park in 1968 unveiled a system based on the notion of a new sort of computer interface that used windows, a mouse, and a pointer (some sources make the P stand for pop-up menus) – a WIMP interface. And that was windows not the capitalized sort: Apple was first to make a commercial go of this, and young Mr Gates came late to the party. Now, the command-line interface is unknown to many computer users (a majority? – this is neither conclusive nor representative, but more than two-thirds of visitors to this blog use Windows ). 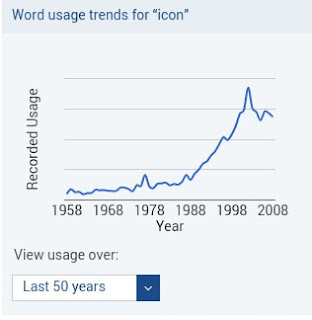 Frequency graph
(Scroll down to the bottom of the  page,
and wait for it to load)

Over more or less the same period, the word dozen was suffering  a similar change – but in the other direction. The reasons  for this were mainly cultural (decimalization and metrication – in the UK, that is), though these were no doubt reinforced (and to an arguable extent prompted)  by a technological imperative: the calculating infrastructure (computers, electronic calculators, adding machine, cash registers and so on) favoured base-10 calculations

Our dozen derives, unsurprisingly, from the French douzaine – "about twelve". In French -aine is a suffix that can make any number approximate; in English, though, dozen is the only ...

<digression>
I was hoping that, in recognition of the fact that flowers are sold in 10s and 5s, the word dizen would evolve (French dixaine). Sadly. it hasn't happened.
<digression>

...such word we have; quarantine is related, but came via Italian quarantina giorni – the period that ships from plague-ridden countries had to wait in the offing [never thought I'd use that one, except in the song "Blow the Wind Southerly"] before putting in at 17TH-century Venice. 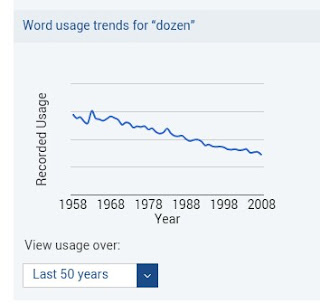 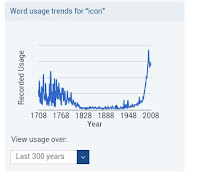 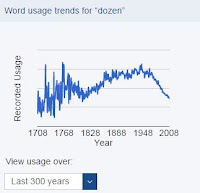 But this analysis oversimplifies. The high-point of that 50-year picture for dozen wasn't appreciably higher than in the 18TH century (see left).

And although the rise of icon reaches record heights – well above the 18TH-century peaks – it did enjoy some popularity before its 19TH-century doldrums (right).

There's more to be said about derivatives, but that's enough for today. If this sort of thing floats your boat, stay tuned for an update.

PS So much for icon. But the adjective derived from it was not subject to the technological influence I mentioned earlier; if you click on the right part of a window on a computer screen, it doesn't become iconic. Moreover, a little painting of a saint in the Orthodox church isn't iconic either – at least, not any more: this Etymonline excerpt shows that that, indeed, is what it once meant (what else, in 1650?):

1650s, "of or pertaining to a portrait," from Late Latin iconicus, from Greek eikonikos "pertaining to an image," from eikon "likeness, image, portrait" (seeicon)...

But now, the word iconic is reserved exclusively for the more recent cultural sort of icon; so, as one might have expected, its nigh-on vertiginous (do I mean that, or just vertical?) rise in usage over the last 60-odd years: 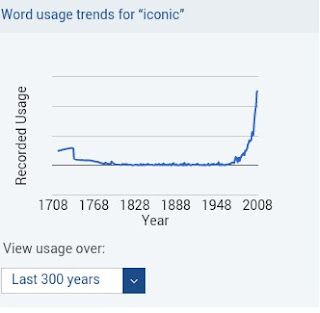 But if a window turned into an icon on a computer screen isn't iconic, what is it? In the early days of WIMP interfaces, various neologisms were toyed with, among them iconize and iconify. Once you had a verb, a past participle could describe the thing on the screen. In this Wild West of maverick nomenclature, Microsoft felt the need to lay down the law. Their Manual of Style for Technical Publications (my copy is from 1995) felt strongly enough about iconize that they devoted to it a separate headword:

iconize
Do not use; instead use shrink to an icon or minimize.

– a forlorn hope: in nearly 20 years of exposure to technical publication, I saw many more instances of iconize than of minimize in this context: Sic semper tyrannis – diktats about language use don't usually work, though their existence is often a useful indicator for students and observers of language change (as this blog has shown on several occasions).

b
PPS: A couple of clues:

Proceed with unspecified questionable practice? Get away! – (4,2)
Such a philistine most unlikely to visit place dedicated to literati– (5,6)

An answer to the second clue: POETS' CORNER. Can't do the first one right now.