Songs in my forthcoming concert have made me think about gender. My first ..issue, thinking point.....? comes in Fauré's Cantique de Jean Racine (written  'when Fauré was still at school', as programme notes tend to say, although he was a fairly mature 19-year-old at the time). The basses sing Dissipe le sommeil [... ⇦ NB] languissante qui la conduit à l'oubli de tes lois.

I've sung this piece many times [see here for a rantette], but only recently I started to think about gender. There was no feminine noun that the object pronoun la could refer to. If the thing that was the object of conduit was sommeil then the  languissante shouldn't have its feminine ending, and the la conduit should be l'a conduit – so that it's not an admission of weakness but a confession of past sins. 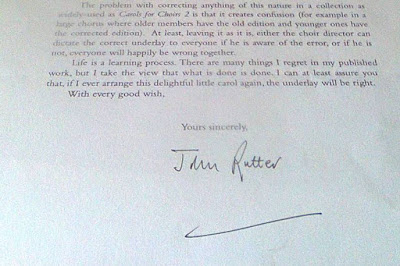 This seemed to me to be a great discovery – all those editors had got it wrong; I started sharpening my mental pencil, in preparation for a letter to the publishers of European Sacred Music. After all, the editor was John Rutter,  and I had a history of textual nit-picking with him:

But look back at that NB a couple of paragraphs back. Before writing my planned letter I checked the score, and realized my potentially embarrassing mistake: the basses don't sing all the words. The upper parts sing the whole sentence:

So I'm more circumspect about questioning musical  settings now.  But in the case of the Elgar setting of My love dwelt in a northern land I'm pretty sure there's something a bit dodgy about the words. My present score starts:


My love dwelt in a northern land
A tower dim in a forest green
Was his...
[my emphasis; more here]

But the original text was by the Scottish poet Andrew Lang, possibly with earlier precedent. One site says.


It's a setting of a poem by Andrew Lang which if my memory serves me correctly is itself an adaptation of a far older Scottish poem.

I wonder whether the original was in a language that has gender...? According to this site Lang held that the beloved was female; and here she is dying in Elgar's setting:

Two pages later, though. she's had another sex-change, back to the "his" of the opening bars:

Could it have been something like sein Herz? But maybe this suspicion  is related to the fact that I first sang this song in a programme together with a later Elgar piece with words by Alice Elgar, who I was ready to believe had got a translation wrong. But, as I said, it's from a Scottish poet; and he didn't use 'he' either; but nor did he use 'she'. He used 'My'....[curiouser and curiouser.]

English students of foreign languages that have gender markings have to get used to the fact that the English possessives are marked for the sex of the possessor; many other languages are marked for the gender of the thing possessed. This gender versus sex distinction was one pointed out to me by Joe Cremona (see this blog, passim [that's Latin for 'So often that I can't be bothered to check a reference']). "Concrete things have sex; words have gender." In English, we put a further restriction on the first part of that rule – "Concrete things have sex only if they're animate"; and we don't have the second part (about gender, with a few arguable  exceptions, like ships and old cars; the few words that look as if they are gendered – mostly pronouns and possessives – in fact denote sex.)

Isn‘t "only if they're animate" an improbably arbitrary restriction? Hardly. In The Unfolding of Language  Guy Deutscher writes of  an Aboriginal language that assigns the gender "edible vegetable" to an aeroplane. He sums up his point:


In linguistic jargon...'gender' has nothing to do with sex  and can refer to any kind of classification that a language imposes on nouns. While sex-based gender is an extremely common type of classification, some languages have special genders not only for 'male' and 'female' but also for classes of nouns such as 'long objects', 'dangerous things', or 'edible parts of plants'.

When there‘s a correspondence between sex and gender (une fille, for example, is both feminine and female, but ein Mädchen is neuter) a phonological rule can interfere; you don't say ma amie because of the initial vowel in amie.


<harebrained_notion>
Did Bizet make use of this rule in Carmen's claim to be going chez mon ami(e?) Lillas Pastia? Does she toy with Don José's jealousy with doubts about the sex of Lillas Pastia? Lilas is a girl's name; certainly, when I first heard the Seguidilla I assumed Carmen was referring to a woman; I couldn't hear the -ll- that Bizet gave it. Does this make it male, I wonder.... Bizet's only clue (well, I haven‘t read the libretto in detail)  is to write that Lillas is an aubergiste – and I think Mistress Quickly was one of those.
</harebrained_notion>


But I must get this post out there before the concert this Saturday.