... or, as they say in the army, 'Dismiss' (The similarity of the two words is no accident.)

Dismiss SEEMS to have been the word used by Walt Whitman when he said whatever it was that I first met in translation when I saw this tweet a few days ago:

I say seems because I  haven't been able to track it down. That is, it's easy to point to a few websites full of Whitman quotes; but they don't agree with each other. Usually Dismiss is OK, but the syntax of what follows ('anything that', 'that which', 'what', 'whatever'...) and the verb used  (offends, harms, hurts, insults...) varies widely. And the lists of quotes don't cite a printed source, so I can't check. Perhaps it's something that Whitman said often and in various ways. The pithiest and most likely seems to me to be 'Dismiss what insults your soul' (my personal preference is for offends, as in the Italian translation that started all this, but I suspect Whitman went for short words).

Anyway, my reason  for noticing the quote is the marvellous word Sbarazzati, which has nothing to do with Whitman. It's two words really, so I was a bit disappointed when I found that Whitman had used the  rather unassuming word dismiss. Before looking on the web I toyed with various possibilities: 'Disencumber yourself''? 'Throw off'? 'Cast off''? 'Lay down'? 'Shake off'? 'Shun'? Even, perhaps, 'shough off' implying that encumbrances to your soul were like a reptile's dead skin . Pregnant and pleasing, that one, but hardly Whitmanesque.

My own retweet summed up my feelings:

That's all for now. Mustn't miss the cricket. As the papes say, Ite, missa est – Latin, more or less, for 'That's all folks'.

The reason for my admiration for sbarazzarsi  is the initial s. An initial s, often tacked to an existing word (as in battere / sbattere, bloccare / sbloccare), can add all sorts of nuance. In English, we embark and then disembark, but Italian is much less profligate in its use of affixes; they imbarcarsi and then sbarcarsi. The initial s carries – often but not always – some kind of negative connotation: un sbaglio is a mistake or error, something that is sbagliato is full of mistakes. Sometimes the negativity is not so clear: sbadigliare is to yawn, sbafo is at someone else's expense, sbalordire is to stun or amaze, sbizzarrirsi is to indulge one's whims.... The uses of this initial s are infinitely variable, and I...

But speaking of indulging one's whims, I have things I should be doing. 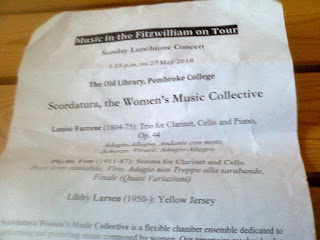 On a visit to Cambridge last Sunday I came across another example of this s- device, in the name of the performers at a lunchtime concert: Scordatura.

A stringed instrument is scordato when it is tuned to a non-standard tuning. For example, one of the more common (and more simple) scordato tunings of the guitar, normally EADGBE, is DADGBE (with the bass E slackened off a tone).
Posted by @BobKLite at 17:40