When Roy Plumley devised Desert Island Discs in 1942 I suspect he was influenced by Jules Verne's L'Île mystérieuse, published nearly 70 years earlier in 1875. In that book,published in the same year in an English translation by Mrs. Agnes Kinloch Kingston (and retranslated the following year....

<unanswered-question>
Was it that bad? Maybe naked sexism is to blame, or maybe the original translation was just a rush-job always intended to be improved once the initial novelty had been cashed in on. It'd be interesting to find out (but not, I suspect, interesting enough for me to do it). The Wikipedia article suggests the Kinloch translation was expurgated. If interested, make my day.
</unanswered-question>

Jules Verne answers the question What does a castaway need? quite comprehensively with the contents of a fortuitous chest found among the driftwood after a wreck:

Clothes:—2 dozen shirts of a peculiar material resembling wool, but evidently of a vegetable origin; 3 dozen stockings of the same material.

I expect the bible was in an appropriate translation, which to Roy Plumley would have been the King James (AV), though Jules Verne probably had something else in mind.

Modern castaways care less for the soul (in a secular sense, that is). One of them, in the Children's  Writers subseries of Desert Island Discs Revisited, was Philip Pullman.

<mini-rant>
And, incidentally, if the BBC are so pleased about the size and range of their archive (they go on about it often enough) they should invest in some kind of usable index. I heard this episode recently on Radio 4Extra, but I'm blowed if I can find it. It's not so much an archive as a gigantic compost heap. But I digress.

The Children' Writers subseries is there OK.., but not Philip Pullman. Perhaps the episode is too new to have been indexed. But I know I didn't dream it, because of the surprising absence that I'm about to recount. Now read on.
<mini-rant>

I've listened to many episodes of this programme, probably 200-300 in all, and I'm accustomed to atheists, when told they're getting the Bible, who say 'Well you can keep that'; to which I always reply (in a polite sotto voce),

But what about the language? The Bible's a priceless source of the things we say and do: expressions like 'Good Samaritan', 'Lazarus', 'Pearls before swine', 'the powers that be', 'David and Goliath', 'scapegoat', 'Prodigal Son', 'cast your bread upon the waters','the patience of Job'...(there must be hundreds if not thousands of these, part of the texture of the language and underlying much of Western European culture – particularly music and literature).

Pullman, though not a practising Christian, avoided saying 'Well you can keep that.' "Aha," I thought, "At last someone's going to defend the AV on grounds of language and culture." But he didn't say that. The BBC's woeful indexing system prevents me from checking what he did say, but it was something along the lines of 'It's full of good stories and wisdom.' Well yes, but there's more to it than that, and it was disappointing that Pullman didn't say so.

Disappointing and surprising.  Pullman has studied the Bible closely (much more closely than most of us). In a review this time last year in the Guardian Richard Holloway, former bishop of Edinburgh, wrote

Though he wears his scholarship lightly as befits a master storyteller, there is no doubt in my mind that Pullman has a complete grasp of the intricacies of the quest for the historical Jesus. Like Schweitzer, he thinks Jesus was an immeasurably great man who died to bring in a better world, the difference being that Schweitzer believed Jesus died trying to force God's hand, whereas for Pullman Jesus realised in the garden of Gethsemane that there was probably no God, so any bettering of the human condition is now up to us.

This review escaped my notice in April 2020,  but I came across it in connection with a book I'm just reading: The Good Jesus and Christ the Scoundrel. In it, Pullman rewrites the story of Jesus, but in a world where Mary's son was twins – Jesus (the good one) and Christ (who hasn't yet [I'm only halfway through] merited the epithet 'scoundrel'). And the central counterfactual (a world where Jesus and Christ are a sort of first-century Palestinian Jedward) made me think of the two worlds in the Lyra books. At least, I think it did.

<plantedMemory-query>
I say 'I think it did', because the source of "my" idea may be that review:

In Pullman's allegorical retelling of the Christian story, Mary gives birth to twins, the first born called Jesus, the second born  Christ. Christ, a feeble[HD: ??? Granted, he was 'small weak, and sickly' as an infant, which suggests he didn't grow up to be an alpha-male; but was he 'feeble'?], introspective character, is Mary's favourite, while Jesus is strong and quiet and calm. "One for Joseph, and one for me, thought Mary." Pullman has serious fun with the interaction between the brothers. It is Christ, impressed by his brother's oratory and moral passion, who puts the three satanic questions to him during his period in the desert. And in the parable of the prodigal son, Christ knows Jesus is fingering him as the timid, mean-spirited, stay-at-home older brother.

One day a mysterious stranger approaches Christ and recruits him to keep an account of the words and actions of Jesus – from a particular perspective. Whatever agency is behind the mysterious stranger – and it is easy to detect the shadow of the Magisterium from the Dark Materials trilogy – he gives Christ clear instructions on how to keep the record. "There is time, and there is what is beyond time. History belongs to time, but truth belongs to what is beyond time. In writing of things as they should have been, you are letting truth into history. You are the word of God." This is actually a fair summary of one theory as to how the theological tone of the gospel records was gradually heightened.

Maybe this is the source of the idea.

So the idea may not be mine. What is mine Ehem. This is my theory, and it is mine. is this: that Christ is no more a scoundrel than Judas was evil in Borges's Tres Versiones de Judas (one of the Ficciones). He did some things that had an  immediate effect that seemed apparently bad; but he was an essential part of the story (and deployed as such by the master story-teller).

I'm no longer much of a user of Twitter, but it remains an endless (and serendipitous) source of new vocabulary. Who'd have thought that a castaway might be coincé? There's a world of difference between an island and a coin [=corner].

I recently came across this game (for use in a French class): 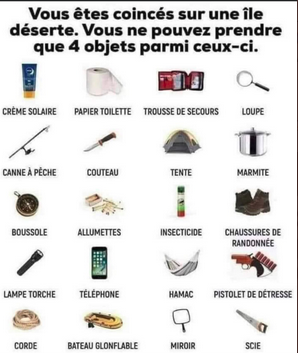 I'm not so sure about gl[sic]onflable. Maybe you can infate it?

But I have things to do – starting with the identification of the Nickelodeon-bird (well that's its working title: its call is just like "Put another nickel in" ).