My attention was recently brought to this: 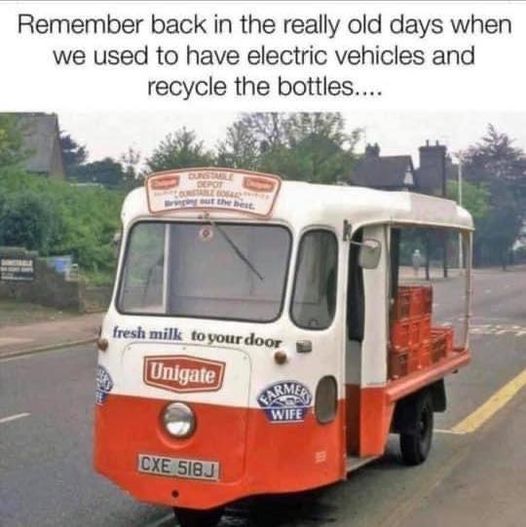 "Really old days?" I thought. Unigate was a concoction not heard of until 1959...

.  If the really old days extend back as far as 1915, we find a fore-runner of Unigate – United Dairies. Also sprach  Wikipedia:

During World War I, there were dire shortages of men, horses and vehicles commandeered for the war effort, hampering any business which was reliant on the timely distribution of its products, such as a dairy company. United Dairies was formed in 1915 when Wiltshire United Dairies (established in Melksham in 1897), Metropolitan and Great Western Dairies, and the Dairy Supply Company merged in an attempt to pool their resources and keep their companies operating until the end of the war.

A  rival to United Dairies was Cow & Gate.  And when the two companies came together in 1959 they did the sensible thing and melded the two names.

<aside,>
In later years in similar circumstances a manager would throw money at the idea and come up with some monstrosity such as the short-lived and ill-starred Consignia (discussed a while ago here)
</aside>

But in 1959 the world was simpler. A few years later, my middle brother had a holiday job at Griffin & George, which as it happens had a long history of mergers that treated the constituent company names like bits of Lego (although in view of the engineering context, Meccano would perhaps be a better metaphor).

The origins of this firm go back to circa 1881, when the company Baird & Tatlock was founded in Glasgow. In 1896, the partnership dissolves, Hugh Harper Baird going to London and John Tatlock staying in Glasgow. In 1903, the London company became Baird & Tatlock (London) Ltd. In 1915, the Glasgow firm also took the name of Baird & Tatlock, Ltd, spurring a big dispute over who had the rights of using that name. The two firms held the same name until 1925, when the Glasgow company merged with John J. Griffin & Sons, Ltd (a London firm of Glasgow origins), and began trading under the name of Griffin & Tatlock Ltd in 1929. In 1954, Griffin & Tatlock merged with W. & J. George & Becker Ltd. and Standley Belcher & Mason Ltd. to form Griffin & George Ltd., which is still in existence today.

Well, time for my constitutional. Got to get in training for the Walk of Light tomorrow week.

Email ThisBlogThis!Share to TwitterShare to FacebookShare to Pinterest
Labels: autobiography, b