From spine-tingling to nerve-jangling

The starting point for today's jaunt...


<note_to_self>
Must check on the etymology of jaunt. Looks a bit Indian to me. like jamboree and jodhpurs and juggernaut.


<cut_to_chase>
Couldn't help myself. 'Unknown origin' says Etymonline. But the trip to that source wasn't entirely wasted, as it's added to my stock of words that have done a somersault and reversed their meaning (as, for example, has backlog, discussed here (and elsewhere, from time to time: you know the drill).

There's not a lot on Etymonline to justify this switch in polarity; well. nothing really:

...is a virtual choir recording in which I have a paternal interest. I'm not a fan of most web content (as they say) – most of it a mixture over-sentimentalized verbiage and meretricious clickbait – but this really does live up to its billing as both "spine-tingling" (though the headline wasn't that concerned about hyphenation) and "spellbinding" (a word that recalls to me that Bennet madrigal discussed in an update to this: "music the time beguileth").

In 2016 this Tallis piece displaced Spem in Alium – (House Song of the Van Helsings [no, that's Allium, 'Hope in Garlic'] {This is getting very silly}) – as my favourite (by that composer), as my choir prepared for the tour mentioned, tangentially (you know the drill), here.

On our first night in Newcastle a bunch of us ate at a restaurant on Grey Street, where I noticed this plaque (not a blue plaque, I noticed, perhaps for some reason: Black for foreigners that nobody's heard of? Or maybe it's more subtle than that: grey to match the street. 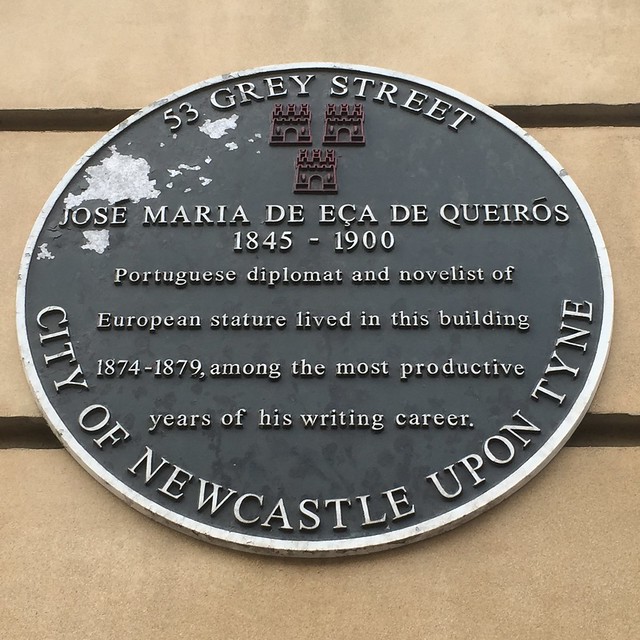 Well I had (heard of him), and read a good deal of his oeuvre (or obra as we say in the trade).


<autobiographical-note>
and earlier this year (2020, keep up) I entered  a translation of some of his work for

(Excuse the shouty typeface; I cut/pasted it from the entry form.). As well as being a novelist and a diplomat he was also a journalist, and a posthumous publication in 1905 assembled much of his work as Cartas de Inglaterra. He was a sort of fore-runner of Alistair Cooke, writing "Letters from England".

I was first introduced to his work at a summer school at the Universidade de Coimbra, where they had a proprietorial interest in him as an old boy more than a century earlier.

<aside>
The lecturer had a quaint way with pronunciation, joining together two vowels with a... No.  TMI. Vivid memory though.
</aside>

Returning to Tallis, I also sang the piece as a visiting Old Member at my Cambridge College in May 2018.


<autobiographical-note>
We visitors were each flanked by members of the present Corpus Christi Chapel Choir, who had mostly been raised as trebles in cathedral schools. So they had a trained reflex to raise a hand when they (rarely)  made a mistake. If I had done the same I would have given myself RSI.
</autobiographical-note>

And more recently we sang it at the WCS choral workshop back when the only place in Corona lockdown was Wuhan; and the (sadly few) basses made such a mess of our E'en the spirit of truth entries that it was not so much "spine-tingling" as nerve-jangling.


But I have secateurs to wield
And sheds to fix before I shield...

<apropos enemy="covid19", first-casualty="language" >
Which reminds me: I'm finding it hard to say 'I'm shielding' (which is the magic word for people especially at risk).  The health chappies (Witty et al.) are obviously not conversant with the Sapir-Whorf hypothesis – which sprang partly from Benjamin Whorf's experience working with insurance claims. He recognized that the way people described situations often contributed to misfortunes; for example, the phrase "empty petrol cans" encouraged people to underestimate their flammability, as "empty" can mean null or void or having no effect – as in "empty threat" "empty promise" and so on.

Similarly (at last, the point) the verb shield implies strength. A (hero) shields B (vulnerable person) from C (danger). So saying 'I'm shielding' invites the belief that I'm strong. So when I was recently ordering some pills online I asked for them to be delivered to my home address rather than asking MrsK  to queue outside the pharmacy (which I gather we're saying now instead of chemist – I'm tempted to do the full Shakespeare and say apothecary). But I didn't want to say "I'm shielding" in case someone who spoke English misinterpreted it. (On the international stage I reckon this might be more of a problem. People exposed daily to Wittygrams know all about this (ab)usage; but not Johnny Foreigner.)

Just saying. People planning resistance campaigns of all kinds need to think about the language they're using.

...And sheds to fix before I shield.

That's all for now

PS
You see? Thin end of the wedge. The syntax of the verb 'to shield' was threatened by covid, and now the door's open for further abuse. Emily Maitlis, on yesterday's Americast, used the expression "He was shielding" to mean "He was sheltering" – with no hint of a virological meaning.
PPS
Come to think of it, the verb 'shelter' has precisely the kind of transitive/intransitive flexibility that 'shield' is beginning to have.
Posted by @BobKLite at 15:02