The starting point for today's ramblings is the word assassin. Followers of The Old Man of the Mountains (shaik-al-jibal) were known for (in the words of Etymonline)  "murdering opposing leaders after intoxicating themselves by eating hashish." It goes on:

1530s (in Anglo-Latin from mid-13c.), via medieval French and Italian Assissini, Assassini, from Arabic hashīshīn "hashish-users," an Arabic nickname for the Nizari Ismaili sect in the Middle East during the Crusades, plural of hashishiyy, from the source of hashish (q.v.).


The Etymonline entry for hashish reads

That mention of cannabis invites the reflection that the English word canvas is related. Unstressed vowels between consonants (like the second a in cannabis) are, as students of language change over time say, unstable: they tend to disappear.

Here , relatively early in the life of this blog, I was writing about a spiral ring found in Pompeii,  with an inscription that included the word domnus (sic, no i).


... no-one could presumably suggest that there was not room, in a 10-15 cm spiral ring, for one little I, or that this one-stroke character was too complex for an otherwise impeccable craftsman! No, people were dropping the unstressed I in speech; and this accounts for words like the Italian Donna and Spanish Doña when the  Latin was Domina . (I changed the sex of the lordly person, because in the masculine the attrition of an unstressed vowel has gone one step further in Spanish – Don [which dropped its unstressed vowel {HD 2019: that is, after dropping the unstressed i it dropped the unstressed u}].)


It would have been less contentious to cite the Portuguese donna, as in current Spanish the change has gone further, with the introduction of the ñ.

Anyway, the same happened to the unstressed a in cannabis (though in a different context, of course – not, as linguists are wont to say diachronic) to produce the word "canvas" – woven from that "herbage, dry herb, rough grass, hay.".

The -in of assassin is, incidentally,  a false  plural, like "a criteria", "a panini", "a cherubim".


<THE_USUAL_PROVISO prescriptivism="0">
(I hasten to add that that "false" is an indication of how the word was formed, not a value judgement. Some of these mistakes are becoming standardized.  I won't say "a panini" but at some stage that sort of finger-in-the-dikery will become misplaced  A mistake is at the root of many words. My favourite, and oft-cited, example is the French  word for bat – discussed at length here. [I recommend that piece, but if you don't have time the short version is this: a chauve-souris is not a bald-mouse but an owl-mouse.])
</THE_USUAL_PROVISO>


If the notion of a fighting force getting high before spilling blood seems odd, try your preferred search engine with the string US Army Vietnam drug-taking. I get nearly 22 million hits.

But Vietnam was by no means the first theatre of war that encouraged....


'Dutch courage' derives from the English derision of the Dutch which came about during the Anglo-Dutch wars.

Strictly, the Phrase Finder is at pains to point out that the use of alcohol to "stiffen the sinews" wasn't the chief aim of the original users of the expression. Rather, the Anglo-Dutch wars encouraged the use of 'Dutch as a pejorative: 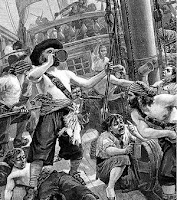 I'm not sure I buy the pejorative idea. After all, a "Dutch auction" isn't a substandard or risible auction, it's just a different sort of auction  So I am not so quick to dismiss the idea that Dutch fighters had a nip of the hard stuff before an engagement. They wouldn't have been the first to do it, and gin was cheap and plentiful

Time to return to real life.