English tests as part of the 'hostile environment'

“Panorama established that a few dozen people cheated, but the way the government has responded has blighted the lives of thousands and thousands who did not cheat. All the people I’ve met feel mortified that anyone would think they would cheat."
Source

My attention was drawn to the article by this tweet: 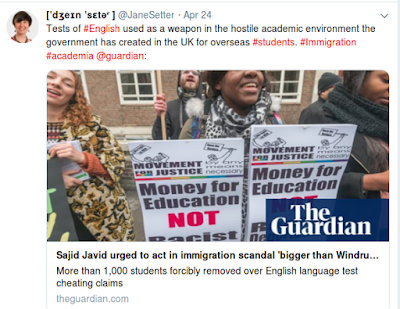 And the writer also wrote a blog post; "rather angry" she said:

Not very angry – bit of a shame really for a fan of (written) blood sports; I'm partial to a literary hatchet job.  But there's a lot to be angry about:

I knew there had been problems with some of the centres running tests of English, but it now turns out overseas applicants and some who are already studying in the UK for whom there is no evidence of cheating are having their visas cancelled, denied or - in extreme cases - being forcibly removed from the UK.  Many have asked to sit tests again to prove their proficiency and therefore eligibility to study in the UK. This has fallen on deaf ears.

A few days later the Guardian upped the ante:

The Guardian has learned that a special team overseen by the Home Office was established in January 2017 to deal with the growing backlog of legal actions related to a Home Office decision in 2014 to revoke or curtail the visas of around 34,000 students whom they accused of cheating in a government-approved English language test.

The Indy came late to the party


The Home Office is to be investigated over its decision to cancel the visas of tens of thousands of foreign students and remove more than 1,000 people from the country as a result of cheating allegations in English language tests...

On Friday, Mr Timms, MP for East Ham, said the treatment of the students had been “a disgrace”, telling the BBC: “They trusted Britain to provide them with a decent education. Instead, they've been falsely accused of cheating and been given no chance to appeal. They've been left in limbo for years.”

In truth though that came "late to the party" needs qualifying.  As the same Indy article said:


The Independent revealed in February that some students were still being detained and were living in “terror” despite not being involved in the scandal.

This is a disgrace  – in the fullest sense of the word (was the creation of the "hostile environment" gracious?) Amid all this Brexit nonsense, the last thing we need to  do is alienate well--intentioned visitors (visitors, incidentally, who pay good money to contribute to the educational experience of domestic students). There is a  path to be navigated  between "a hostile environment" and the wielding of soft power; and this shabby episode represents an ugly deviation away from the side of the angels.