Some time ago I wrote (here) about a review of Steven Pinmker's The Sense of Style: The Thinking Person’s Guide to Writing in the 21st Century (another candidate for the pipe-dream entertained in this post).


<original subject="David Crystal, The Stories of English">
My fantasy – though I haven't discussed this with the good Professor – is to win a large amount of money and become a proper publisher. My Rights department would negotiate with Allen Lane to acquire the rights for a properly designed book, and my Design department would make this book CanDo Publishing's lead title.
</original>

In the case of the Pinker book, a large section (about 30%, I'd guess, though the tabulated sections are interspersed with full text) is presented in four columns:

The printed width of the page, net of margins and inter-column spaces, is about 4 in / 10 cm.


<I_know_I_know>
If I were showing off my (slight) understanding of book design  I'd be using the printer's measures of points and picas; but why send my readers off on a voyage of either confused ignorance or web searches?
</I_know_I_know>

In the nature of things, the fourth column is the fullest. But with such a tiny column width (the columns are more-or-less evenly distributed) there is often a single word on a line, and the comment section continues its frantic okey-cokey for an inch or two (sometimes even more), accompanied to the left by three blank columns. The Sense of Style would be a good deal more stylish (not to say readable) if it were redesigned.
<aforementioned_pipedream>


In considering questions of usage, a writer must critically evaluate claims of correctness, discount the dubious ones, and make choices which inevitably trade off conflicting values

And sometimes his advice is amusingly pithy: "Look it up" he says (more than once, I think, but I didn't  take notes).

I have to admit that a number of issues I blamed on the Independent's review (which was a filler, topped up with a number of the reviewer's pet hates) – even one that I pooh-poohed in this cartoon... 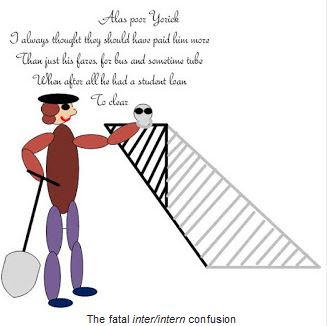 ...were Pinker's. In my defence, though, Pinker refers to the confusion of the participles (interred vs interned) and the review (I think – the original seems to have been truncated)  refers to the inter/intern pair.

I don't agree with everything Pinker says (and indeed there were bits of it that I didn't follow; I was  on holiday, and it isn't your typical holiday read). And sometimes his side-swipes are unargued and capricious: on presently (used to mean now) he writes "About half the Usage Panel [of the American Heritage Dictionary] reject it, but for no good reason". I suspect that he himself accepts it (and it seems to me possible that he rounded up that "about half").

And sometimes he glosses over an interesting issue: of  flaunt/flout he writes


A malaprop based on the similar sound and spelling, together with the shared meaning "brazenly".

Hmm???. What is shared is part of their meaning, an aspect of it. If they shared the meaning they'd be synonyms (which they're not, as Pinker obviously knows). Initial fl- is a phonesthetic marker. There is a family of fl- words that have to do with flamboyance of movement or something else. They share not a meaning but an aspect of their meaning, and flaunt and flout just happen to be most readily confused:  flounce,  flip,  flop, maybe even  fly,  flame  flamboyant... But phonæsthesia (the way sounds suggest things,  the basis of onomatopœia) might not fit in the tiny column width; so Pimker has to cut corners. (Seriously, I think he sometimes trivializes an argument or misses a trick just because of that pesky column width.)

Generally, though, the book is worth  reading (and referring to).

But the garden calls.

Update: 2018.07.18.08.45 – Added two words (underlined) to ante-pre-penultimate para; I had been making the same mistake as the original reviewer of Pinker's book: "Now with added Linguistics". In my case the added ingredient was phonesthetics.