Generally speaking, I'm in favour of the BBC. No prizes, though,  for detecting a none-too-faint whiff of adversity (or but-ness) in the offing.  A while ago the first of three facinating programmes was aired. The second and third programmes were a vast improvement...


<rant>
(although it's hard not to judge the acuity of the analysis  on the basis of a scarcely credible abuse of incredulously 15'17" into the third, as if bacteria were going around scratching their tiny heads – but one shouldn't be snobbish about... hell yes I will:

this is BBC Radio 4 for pity's sake, and we
can expect at least a MODICUM of literacy

<loaded_term value="literacy">
Tricky word that one. I've seen it used in the context of an infant ...

<etymological_fallacy risk="high">
And I have to admit that when I use the word "infant" I have a perhaps over-zealous regard for its root. Sorry, but I regard 'infant who has not yet learned to talk' as pleonastic; infants haven't.
</etymological_fallacy>

...recognizing and responding to the golden arches indicating a certain McFood outlet. But here I'm using it in the specific sense of ability to use words to convey meaning. And don't try any clever-clever stuff about "the meaning of meaning"; you know what I'm talking about.
</loaded_term>

But the later programmes were less of a hook-line-and-sinker regurgitation of a press release from the company that has the very same name as the BBC series (which took the name verbatim from the market leader in this area: The Second Genome...

...) At the time of the series I made a note in a draft that I was inspired to dust off by last Tuesday's Life Scientific, which dealt with the immune system. To quote the programme's précis:


Traditional descriptions of the human immune system bristle with military analogies. There are "lines of defence" against "enemy invaders"; "border guards" at "strategic points. And when barriers are breached, there's "a call to arms". That's before you mention Natural Killer Cells.

But Professor of Immunology and Public Engagement at the University of Manchester, Sheena Cruickshank, tells Jim that as well as the war-like descriptions, our immune system is now being understood in terms of its capacity for diplomacy too. Jaw-jaw as well as War-war.

Our immune system has to know when to tolerate the trillions of microbes that live on us and in us, to hold fire but also to know when full-scale immune activation is required.

But the whole thing  is well worth a listen. Give it a go.

I, meanwhile, must go and learn my words for this – less than 3 weeks away as I type: 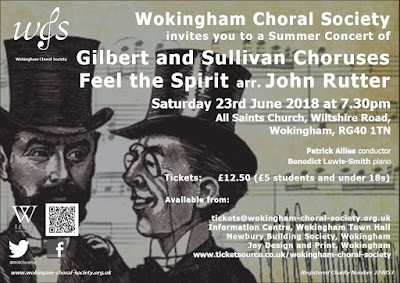 (One or two notes could do with some attention as well.)

Sadly it'll be our  Musical Director's UK swansong with the choir; I say 'UK' specifically because he and the choir will be performing in France in August.

PS: A couple of clues: