Like Pagliacci, Messiah frequently gets an undeserved definite article (although perhaps that undeserved is coming it a bit strong, for people who believe there was only one). Handel's, though, as his original title page showed, has none:

My choir's next offering will be this old favourite – which, like many choir members, I have sung many times before. 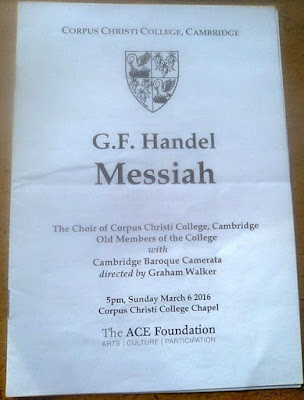 <autobiographical_note>
At last night's first rehearsal I noticed that my score was adorned with paperclips that marked the last performance's cuts. I couldn't, for a moment, recall the last time I had sung it. But this programme fell out.

And this brought to mind the strange experience of singing with a present-day chapel choir member on either side (as we old growlers were interspersed with Real Singers – who had graduated from choir schools, where the custom had been to admit to having made a mistake by "raising your hand, boy" [so that the choir master would know, and know as a result that that mistake would not be repeated]). So whenever they made a slip (usually one that I wouldn't have noticed anyway) they had this Pavlovian twitch of the arm.
</autobiographical_note>


<aha status="interesting but unproven">
The presence or absence of a definite article may, I have just thought, be the root of an affectation  that I have noticed among music lovers. It's Pagliacci, but Il Trovatore.  So rather than risk getting it wrong, they refer to the latter as Trovatore [tout sec – or should that be tutto secco?]
</aha>

If lasts night's rehearsal was anything to go by, our Messiah should be well worth a night out on 24 March 2018: