<quibble>
(it didn't  fail, incidentally, although many commentators who should know better keep saying it did; its outcome was suboptimal but the test worked [although part of what it was testing didn't])
</quibble>

...reminded me of the time in the early-mid '90s when, along with many other concerned citizens I wrote to Al Gore in a vain attempt to throw a spanner in the astrolabe,  as it were. Since its arrival in July 2004, the Cassini space probe has been making  enormous contributions to our understanding of Saturn and its rings. For the nearly four centuries between Galileo's observation (and mis-identification) of Saturn‘s rings in 1610 (he thought their appearance was caused by the motion of two moons), not much was added to our knowledge of the rings – what they are, what they do, what they're made of, how they were formed.... But this knowledge came at a price – not that the price was actually incurred (apart from the obvious cost of simply undertaking this extraordinary voyage). The potential cost, not actually paid, was took the form of a risk

At the time of Galileo's death in Tuscany in 1642,  there lived, a few hundred miles to the north-west in the Duchy of Savoy, the 17½ yr-old Giovanni Domenico Cassini (whose father was in fact Tuscan). Giovanni, according to Wikipedia, was


... the first to make successful measurements of longitude by the method suggested by Galileo, using eclipses of the galilean satellites as a clock.

And it was presumably this link (not his father's birthplace – that was one of mine) that led the Caltech engineers who conceived of the 10 years+ mission to observe the rings of Saturn from Saturn orbit, andto dubbed the mission Cassini.

My reason for writing to the Vice President more than twenty years ago was the inconvenient truth that the Cassini spacecraft, to perform its gravity-assisted (slingshot) bypass of the Earth involved a craft carrying 72 lb of plutonium nearly colliding with the Earth. The closer it got, the greater the 'gravity assist', so the engineers could be expected to under-estimate the risk. Cassini was falling through space, and the Earth was saying Here, here, oh please sir, hit ME. Cassini came tantalisingly close to the Earth before whizzing past. But the Earth kept on begging to be hit. This is when the slingshot effect kicked in  – the potential nuclear device turned round and had another go. (The risk would be clear to any schoolboy [or schoolgirl if they played, though in my experience at a co-educational primary school they didn't] who has played conkers in the pre-Health & Safety era and had the tethered missile loop back and give them a clip round the ear.)

NASA engineers said the risk was tiny, but many other scientists claimed the probability numbers were dubious. This gives a taste:


"Give me a break. They're making these numbers up," says Michio Kaku, a professor of nuclear physics at the City University of New York, adding that by his calculations of NASA's own accident scenario, some 200,000 people could die if Cassini crashed in an urban area. "This is a science experiment, and we are the guinea pigs."

Whatever the numbers, the risk was small. But the risk was there. And compare Cassini's  Earth-tickling  gravitational assist with the more recent Trident failure (involving, after all, US engineering in both cases): that missile took an unplanned right-turn somewhere over the Atlantic and had to be destroyed to prevent it crashing on the US mainland. If the Cassini vehicle had made a similar unplanned detour during its periterranean jaunt (there may be a proper word for that, but I reckon it's less effort to just make one up) future palaeontologists might have found an anthropocene/Trumpocene boundary (I know Trump missed by nearly 20 years, but in geological dates, who cares? [Besides,  I think we can safely leave it to him to merit the eponym....])

But what of Trident? There is some merit in this view: 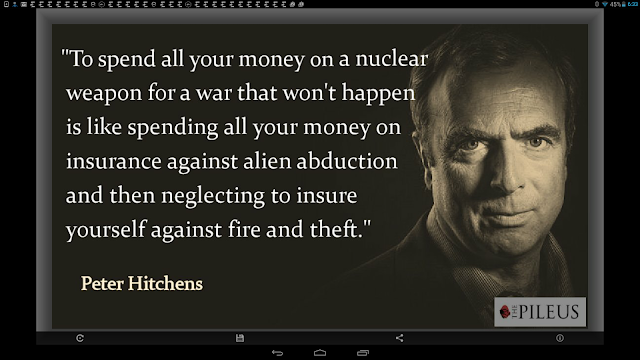 My own view (which I may have voiced before, though not in this blog, I think) is that, given the realities of the nuclear winter, it's more desirable to be vaporized by the first strike than to survive. So, given the ridiculousness of deterrence based on Mutually Assured Destruction, it's MUCH cheaper to build a massive nuclear device (big enough to  wipe out the entire population), instal it in the centre of our own country, and not spend anything at all on a delivery system. In response to a nuclear threat, threaten to self-destruct – that'll teach 'em. :-)

Eppur si muove. But Plus ça change plus c'est la même chose.  In the seventeenth century the Vatican tried to suppress scientific understanding of the facts. It didn't work in the long run, though it caused a certain amount of discomfort before the Vatican's alternative facts were recognized for the hooey that they were. In the twenty-first, the Trump administration is trying a similar trick; and it will fail, eventually, in the same way. But it will cause a lot of discomfort before going down fighting.