I've been thinking about seasons – specifically about adding an s. Taking as an example the frame

I thought it was simple (if arbitrary): you can have a winters day or a summers day, but you can't have a springs day or an autumns day.

But I was forgetting the importance of collocation – what comes next  (in this case).

I was led to uncover this when I wanted to put numbers on this pattern. BNC doesn't happen to include an instance of a winters day.  And this made me use the "any noun" search syntax; which led me to conclude that the pattern is even more uneven. All season names are much preferred without the s (I've no  idea what its syntactical status is – some kind of possessive, I suppose; stay tuned for an update.)

By the wonders of BNC, the following seven links all run a BNC query; depending on line speeds, processor speeds, and all sorts of other techy imponderables, you may have to wait a second or two after clicking for the full story to unfold

...But autumns doesn't follow the pattern of feast and famine. In that case it's feast and starvation; absolute starvation. The string autumns [*n]  just doesn't occur in BNC. And precious few occur in the much bigger (520 million words – more than five times bigger) COCA; just three (of which one is a mistake, resulting from a mistaken parsing of the word back):


I'm  not sure what this shows, except that when you put numbers on something you end up finding that things aren't quite as clear-cut as they seemed at first.

And here are two numbers that have only the very faintest soupspoon of a connection (and even that is arguable – it's just that the number of refugees world-wide can only increase when nation-states take more than their fair share of the planet's resources).

The first comes from a UNHCR report. CNN reported it like this 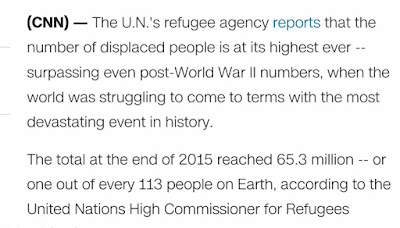 The second comes from the ONS: 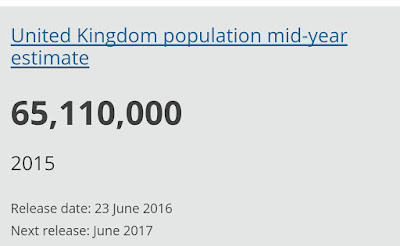 But the numbers reached out and grabbed my attention by dint of their similarity. I suppose another way of looking at it is that we have reached a tipping point: the number of refugees world-wide now exceeds the population of the UK (and that's before any readjustment that Nicola Sturgeon might have in mind

But time's wingéd chariot could do with some 3-in-ONE.

b
PS A couple of clues:

Affect brilliant fedora without an emergency jump-starter (13)
Such a way of arguing makes him a demon (2, 7)

PPS And I meant to add, justifying my subject-line (this is more of a quiddity than a quip), earlier this week I heard something of interest to a one-time translator of songs (a bit of background covered in this old post) . In Monday's Woman's Hour (the song starts at about 18'30")  Kizzy Crawford sang about a pond skater (no, really). She sang in English, but she sang the last chorus in Welsh. One word leapt out at me from the Welsh. Earlier (English) choruses had involved the word lily pad (see? – it really was about a pond skater); and the word that jumped out at me from the Welsh was lily pad.

I looked this up in an online Welsh dictionary: pad lili. What was up? Was Kizzy fibbing?

Of course not. She does say, in the interview that precedes the song, that Welsh is more appropriate to singing about nature. And one of the ways it has of being more flexible may be the choice of translation sources.  By chance I found this alternative translation (in Google Translate): lilypad  – note the lack of word-break.

Marvellous things, dictionaries. But they have their limits.

PPPS The promised update on syntax: the jury's still out. In some cases, it's obviously a possessive; summer's lease is the metaphorical lease held by belonging to a metaphorical summer. There's an apostrophe, and its aptness is not in question. But in summers day there's no apostrophe* and no sense of possession. I'll ask some teachers.

Yes – it's an attributive genitive (also called descriptive). Some people omit the apostrophe, and in cases where the idea of possession is weak (or absent) this tendency is stronger.

*Nonsense – I just misunderstood the BNC's search algorithm's treatment of the apostrophe.  I think  it's true, however, that the apostrophe , which usually marks possession, is less widely insisted on (and, from the point of view of a language historian, more likely to  be dropped   – rather like the apostrophe marking omission before words such as bus, cello or phone – when the sense of possession is weaker.