The end of the affair (stress on foreign words, part 2)

The other three words I had sur lea plancher (a metaphor that will become relevant in the fulness of time: – avoir du pain  sur lea plancher ≅ have work to do, have one's work cut out  [at the risk of confusing the baker with the tailor]) were

I forget the context; it may have been the first half of a Sky Arts programme about The Eagles. An American referred to someone as "a sort of 20th-century Medici" (a lavish patron of the arts). The nationality is relevant, because I often notice that speakers  of American English tend to be more sympathetic (or even respectful) of foreign words' pronunciation. I imagine this is related to there being so many 1st/2nd/nth-generation immigrants there.

Anyway, he stressed Medici correctly, rather than using the common (British) anglicization Medici. The machine generating the sub-titles really went to town on this one, calling to mind the saying


To err is human, but if you want a real SNAFU use a computer

This latter-day Medici became a meta-chief.

I can't work up much enthusiasm to write about this  travesty –  the abuse of word-stress (by several if not all the characters, as well as the BBC continuity people, whom I mistakenly gave the benefit of the doubt) should have warned me not to get my hopes up. There's two hours of my life that I'm not going to get back. For the record, stress is on the second syllable –  but you already knew that, didn't you, from the original sub-titled series.

If I'd seen the word mentioned in the salutation of each of the letters in  Love from Boy: Roald Dahl's Letters to his Mother that Radio 4 serialized recently I wouldn't have suspected an anachronism. Each letter began with what I thought must be 'Dear mama' (given the period and context – pre-war (in the first selection, at least) letters home from a boy at a boarding school). But I did some checking here and found that mamma was indeed stressed on the first syllable; his contemporaries would have written to Dear Mama, but young Roald would indeed have said /`mama/.

But what about that pain sur lea plancher? Well, in last night's Cav&Pag (on BBC 4) I tuned in a bit late. In her intermezzo (as it were), between Cavalleria Rusticana and Pagliacci (the new Covent Garden modern-dress production) even the lovely Clemmy made Cavalleria rhyme with the English cafeteria – which was strangely appropriate, as the setting featured a panificio (bakery) .

But what made my metaphor particularly appropriate was that the first scene I saw (tuning in, as I said, a few minutes late) featured Santuzza singing and Lucia kneading dough. It wasn't yet du pain, and it wasn't on a plancher (which I suppose is the board that a baker loads with loaves before putting a batch in the oven) – rather on some kind of work-surface; close enough, though.

On with the motley, as someone once said.

PS
And it's been a while since I gave you a clue.

Withdrew endorsement of researchers first, then called to mind. (7)

PPS
And I almost forgot  this: PPPS OK, time's up on that clue: REVOKED. 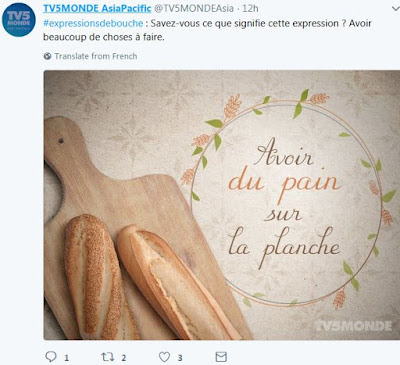