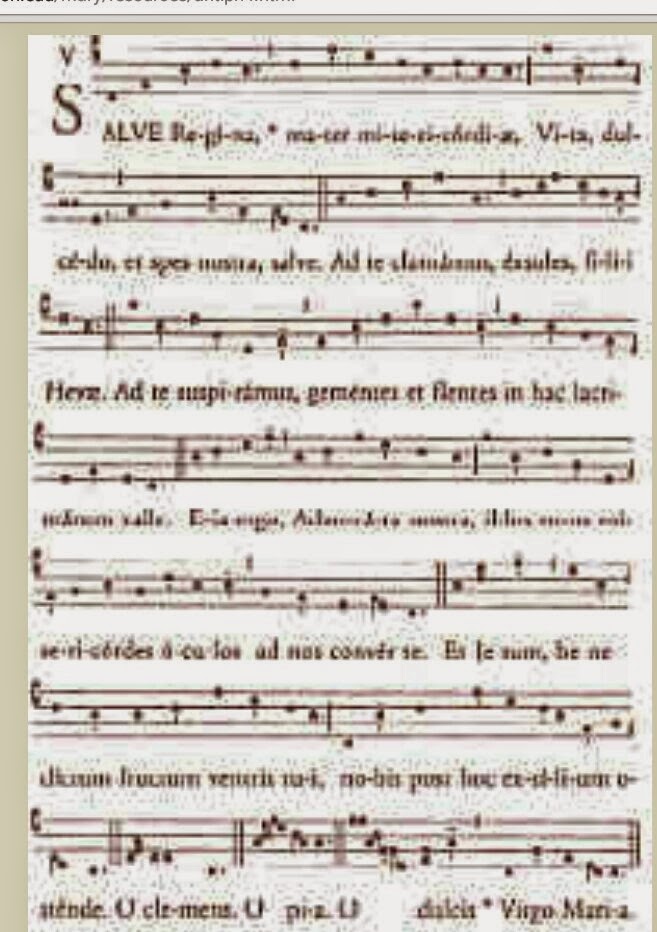 This, believe it or not, is† (or at least was) my school song. My subject line is a reference to the phrase split here over the second and third lines:

which was translated in the rather florid version I learnt at my mother‘s knee (or, rather, Aunty Katy‘s knee) as


To thee do we cry
Poor banishedu/d children of Eve

But in Rossini‘s Salve Regina, which my choir will be singing next month (as an addition to the main piece), the text is "Salve Regina... Madre in ciel... de tuoi figli abbi pietà" [="Hail Queen... mother in heaven.. have pity on your children"]. There‘s no mention  of Eve in the Rossini version. (In fact the words are very different, although the two prayers have a few phrases in common.)

Which may account for two facts:
Ho hum... so little time, so  many digressions, as I've said before.

I nearly have an MO for the new book. The only cloud on the horizon is the brain-dead book creator I‘m using. I plan to see whether it  can be brought up to snuff, and to make available a smallish extract (words that include the letters *al*) in  mid-late Spring (Northern Hemisphere, since you ask

Update 2015.02.23.10:40 – Added textual correction
u/d I‘ve just looked more closely at that Latin text. It says "Ad te clamamus exsules, [sic] filii Hevae". So the Englished version was not just "rather florid", but had a  different spin. Without the comma, the children of Eve, being exiled, are crying; the exile is an afterthought – just a bit of background information. With the comma, it seems to me that the exile is the reason for the crying.

PS –  I‘ve deleted the old footer. And the first bit of the new When Vowels Get Together book is here.