Money down the drain - DRAIN?

My attention was grabbed today [to be honest, it didn't take that much grabbing] by this tweet:

She starts with an interesting piece of typical choplogic:


As a neuroscientist I am interested in how we can use insights from our basic research and apply those insights to understand contemporary life. The brain adapts exquisitely to the environment...

By definition, if you use computers heavily, guess what? You are going to turn yourself effectively into a computer, because that is the environment you have adapted to. You will have certain skills, but not others.

Wow! 'By definition'; this is obviously clever stuff, only to be grasped by trained neuroscientists like Herself. I'm not sure I've got this, but it seems to me that 'if you use handtools heavily, guess what? [nice bit of vox poppery there; 'Don't be frightened by all this clever stuff, I'm talking your language'] you are going to turn yourself effectively into a handtool,  because that is the environment you have adapted to. You will have certain skills, but not others.' Scary. I obviously had a lucky escape when I spent only three weeks in a holiday job as a carpenter's mate's mate's mate. Much longer and I'd've been saying things like 'Sorry, I can't have a conversation right now; would a dovetail joint do instead?'


<rantette>
And I do wish people wouldn't brandish the phrase 'By definition' like some kind of omnipotent weapon at the beginning of sentences, with the general meaning 'It's obvious that...' but with no definition anywhere in the argument.
</rantette>

The insidious thing about her piece is that there are occasional shafts of sense:


... A while ago Michael Gove, when he was the education secretary, said that every child should learn a poem. My own view is that a parrot can learn a poem

The whole point is that the child should understand the poem. Facts on their own are pretty boring, whereas true knowledge is how you use those facts, relate them to each other and put them together in a framework.

Shame about that 'My own view' bit. Another bit of vox poppery. But there's no need for the assumed diffidence. A parrot can learn a poem (well.. a short one). And the word 'knowledge' is an odd choice. But her heart's in the right place (in this instance). It's when she embarks on simple-minded extrapolations from neuroscience to the-trouble-with-education-today that she comes unstuck:


If serious money is being spent on high-tech devices, we need to think whether that will really achieve the best ends. In a report commissioned by Nesta in 2012, Decoding Learning, it was concluded that, "in the last five years, UK schools have spent more than £1 billion on digital technology. From interactive whiteboards to tablets, there is more digital technology in schools than ever before. But so far there has been little evidence of substantial success in improving educational outcomes".


<autobiographical_note theme="educational spending">
I must say, it seems to me that the high-spec end of the spectrum will quickly move downwards. When my daughter was studying 'Don Juan' a few years ago, I recognized the text she was using. When in 1969 I had studied 'Don Juan', the text we used had been quite recently published (June 1967, says Amazon). So in September 1969, when we first opened those olive covers, it was only two years old. Nearly 40 years later, my daughter was using the same text in the same binding.</autobiographical_note>

In the context of education spending this penny-pinching, I'm amazed that any teacher manages to get any hi-tech equipment. But if they can, good luck to them! And anyone who whinges about the cost of education – as Baroness Greenstuff does – should weigh it against the cost of the alternative.

And anyone who decries the pouring of money down the drain, in the case of education, should perhaps reconsider their use of the term DRAIN.

PS With no  great relevance to the theme, I'm adding a diagram that I produced a few years ago as a prompt for further research in (that is, outside) the ESOL classroom, on the subject of drains. 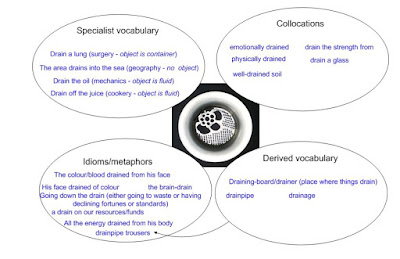 Mammon When Vowels Get Together V5.2: Collection of Kindle word-lists grouping different pronunciations of vowel-pairs. Now  complete (that is, it covers all vowel pairs –  but there's still stuff to be done with it; an index, perhaps...?)