It's easy enough for YOU to say that

A while ago, I lazily left it to a Wikipedia link to explain my use of a $10 word here: it was epenthetic.


<autobiographical_note date_range="2006" theme="word-initial consonant clusters">
During a practice lesson I gave during my CELTA training, with a polyglot class of learners one of whom was a Pole, I told my guinea-pigs, when we were working on a text that included the word 'zloty' (to my private shame, though my academic knowledge of phonology was greater than my trainer's – and he either didn't notice or overlooked it) that the consonant cluster /zl/ 'didn't occur in English'. Of course it does: 'prize list', 'has left', 'is like', 'grizzly'‡.[avoiding possibly contentious examples – that call for footnotes  – there are a fair few one-word examples, but they are mostly proper nouns: Breasley, Dursley, Grazeley [that's one for the Berkshire readers], Hazlitt, Isley, Paisley, Quisling, Riesling, Rizla, Tesla.... The only common noun I can think of, apart from grizzly is gosling]. What I meant was that this consonant cluster doesn't occur at the beginning of a word.
</autobiographical_note>

Word spaces are a fairly recent convention. Many of the houses at Pompeii sported a mosaic like the ones spattered higgledy-piggledy about this page (victims of Blogger's whimsical attitude to graphics). Not only were these signs designed to be understood by people who couldn't read; they were created by artisans who couldn't read:


was their stentorian warning; but nobody was going to ask 'What's an og?' – there was a picture of one  – so the signs did their job.

Other such mosaics at Pompeii had the word space as one might expect: 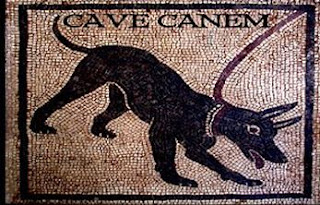 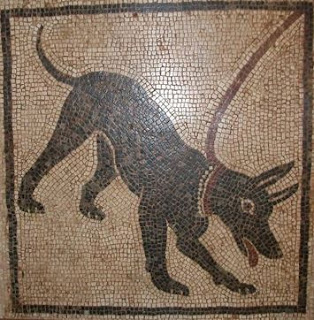 or none at all:

<digression theme="manufactured sameness">
There are hundreds of different mosaics at Pompeii, each one – of course – unique. When, later this century, London is inundated and left to rack and ruin to be discovered by 4th millennium archaeologists, how many different 'Beware of the dog' signs will they find, I wonder... A dozen? Maybe 20...? It'd be interesting to chart civilization in terms of the metric

'Beware of the dog' signs per unit population.
</digression>


Where was I? Oh yes, word spaces. Moving on, let's consider the beginnings of words.

In The King's Speech the Geoffrey Rush character advises the king to deal with problem consonants at the beginnings of words by taking a run up: /maɪ əpi:pəl/ for 'my people'†. Languages often take a similar course with outlandish phonemes or consonant clusters at the beginnings of words. Among the signs of this are changing names of places over time. Stamboul Train could have a 21st century sequel: Istanbul Plane. That 'I' is epenthetic.

There is a rather better-hidden epenthetic vowel in pairs of words that derive from the same Proto-Indo-European root but came to English by different routes, one of which added this sort of vowel: state, for example, and estate. The latter arrived at 13th-century English by way of a route that included languages that need a run-up before the consonant cluster. To quote that Etymonline entry:

So far so good. But Modern French complicates the issue by hiding the 's' behind an acute accent:

Meanwhile, in Spanish for example, we see estado. There's an /s/ there all right., unlike French – which has no /s/ in the word as spoken, just its vestige when it's written down.

About that 'vestige' I have a madcap theory about the divine right of kings. But it has nothing to do with epenthetic vowels and I have things to be getting on with. So it'll have to wait for an update.

b
PS
In the event I made it a separate post.


† I knew I had a reason for mentioning word-breaks, though the casual reader might have wondered what I was on. My point was that, for the King, /p/ at the beginning of a word was a problem. Adding an extra run-up syllable solved that problem by inventing a new word: /maɪəpi:pəl/.

]. A fractious infant is /grɪzĮi:/ [that's the best I can do for now: the typographical tools I know about aren't very open to the idea of syllabic consonants] but a bear is a /grɪzli:/