The word psephologist is younger than I am – just – and it rears its ugly head (well I think it's ugly) every now and then, when there is an election in the offing. A few weeks ago a tweet appeared, pointing to this page :

Far be it from me to question this most august of authorities, but I think there's room for a quibble here.

Etymonline's derivation is from ψєφɩζεɩν, the Greek verb vote. And as the election in question involved pebbles (ψєφοɩ) the ultimate reference is to pebbles. But when Professor R. B. McCallum coined the word in 1952 I imagine he was thinking about the verb. Elections in recent memory haven't provided much scope for pebbles.

A new word is like a new toy, initially very popular and then often dwindling in use. A toy that was new to me when I first came across it (and mentioned it here) was Collins English Dictionary's Usage Trends graph. This is the picture for the entire life of psephology: 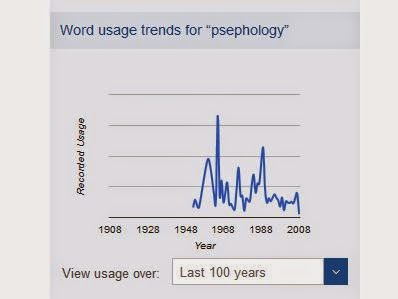 In the '50s and early '60s it was the best thing since ... errm, laminated farinaceous comestibles. Since then it has experienced a steady-ish decline, with a spike in the late '80s. I don't know whether Collins records just disappear in the last few years; but it's interesting to compare this picture with the one for pollster (not an exact synonym, I know... :


<digression>
but I've never been a great believer in the exactitude of synonyms. I've mentioned before (several times – check in the cloud of keywords in the left-right=and column) my old French master Cedric Baring-Gould, who was fond of quoting Grévisse: 'Les mots n'existent pas'. I haven't been able to trace the quote, which is pretty gnomic; but I think it means that words don't have an independent existence, that has no regard for context. In any case where there can be said to be synonyms, one of them will – in that context – be le mot juste.

<meta_digression>
Besides, it's a person rather than a discipline. So here's the picture for psephologist: 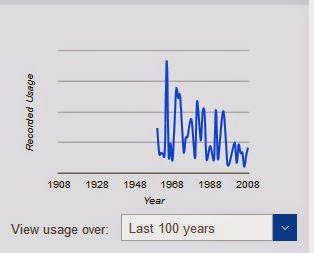 The decline is even more extreme and continuous.
</meta_digression> 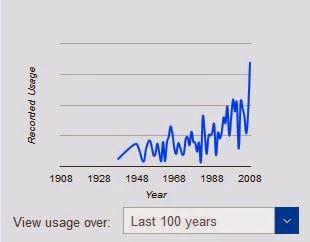 Slow and steady wins the race. Starting a decade or two earlier (1939, says Etymonline) it has been steadily increasing in frequency of use, providing a counterexample to my new toy observation.

Anyway, the thing about those pebbles is that each one represents a person (or faction). And if an object can represent a person, what better way of ostracizing someone than scratching their name on an object and casting it outside the town walls. That object (and some of you are probably already there, but...) was an oyster shell, or in Greek οστρακον.

In gentlemen's clubs the tradition of having an object to represent a voter extended to the idea of voting for or against candidates for membership. But a colour was added, so that white was Yea and black Nay. If you blackballed someone, you voted against membership. (Or is this folk etymology? The necessary research will have to wait for an update.)


The paperback is submitted, and I hope I can get through the final proof stage tomorrow.

PS
This entry appears in Dickens's Dictionary of London, by Charles Dickens, Jr., 1879:


Travellers’ Club,  106, Pall Mall. — The following is the form of recommendation of candidates for this club:... The members elect by ballot. When 12 and under 18 members ballot, one black ball, if repeated, shall exclude; if 18 and upwards ballot, two black balls exclude, and the ballot cannot be repeated. The presence of 12 members is necessary for a ballot. Each member on admission is required to pay £42, which sum includes his subscription for the current year. Each subsequent annual subscription is £10 10s.

This confirms my belief in the derivation of 'blackball' – which I feared might be a victim of folk etymology. It also introduces a link between the words ball and ballot (which I meant to touch on yesterday; I wonder whether those hexagonal drums you see on bottle stalls in church fêtes  could be called 'ballot boxes'

Email ThisBlogThis!Share to TwitterShare to FacebookShare to Pinterest
Labels: #eltchat, #mfltwitterati, autobiography, Cedric Baring-Gould, etymology, History of English, When Vowels Get Together - progress