I was struck (more in sadness than in anger) by a blogpost, which signed off, with unbecoming self-satisfaction:

We hope you will never be confused about “affect” and “effect” again.


Now I wouldn't normally mind this sort of otherwise insufferable smugness if it'd been preceded by a halfway decent explanation. But instead of anything useful in the way of sound/accurate expression it tried to get away with BIG text and bad examples hiding behind sexy graphics.

The first major flaw in this piece has now been silently updated; someone must have noticed its inaccuracy. It said something like '99% of the time, effect is a noun... The other 1% of the time, it's a verb'. Close, but no cigar, as I gather they say in some circles. Well, not very close. In my own post, which referred tangentially to this issue last May, I wrote


The noun effect is just much more common than the verb [the British National Corpus has 22,887 case of effect, of which a  mere 137 are verbal.] Similarly, the verb affect is commoner than the noun – much more so).

That would be, by my calculation, just under .6%, rather than 1%. In the larger COCA (which is perhaps more relevant to the writers at YUNiversity) the figures are 66,151 and 2966 – a higher percentage than in the British corpus (well over 4 %).


But I can't point the finger too hard, as the offending text has disappeared. (I've just thought – maybe it was in a covering tweet†.) The first obvious error was this: 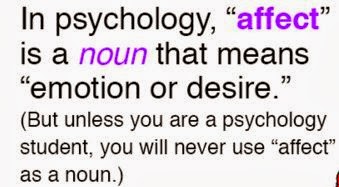 Ermm, up to a point. When I've heard it used in real life


<digression theme="crossword_clue">
I'm a cold prat, mixed up and shunning daughter – suitable treatment for Lear? (10)
OK, this one calls for knowledge of a trade-name, so I'm giving the answer in a footnote.‡
</digression>

I've never had cause to use the word, but in  my experience it's not infrequently used by doctors. The picture that 'illuminates' this text, which you'll see I've cropped (rather than go cap in hand asking permission) is totally irrelevant. I think it shows someone texting and pulling a face. Perhaps he's displaying affectation (which is by no means the same thing as affect). It might have been more useful, to an audience of language students (which I suspect it is), to point out that when affect is a verb the first syllable is usually /ǝ/; when it is a noun the first syllable is always /æ/ because that syllable is stressed.

(My 'audience of language students' supposition is based on a gut-feel about the site in general, added to which is the fact that screensful of readers have either Liked the page [to show the teacher they've read it...?] or reblogged it. One of the latter understandably added: 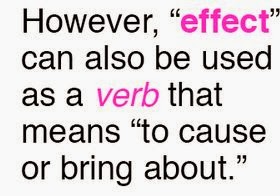 So far, so good. But hang on, look at the example:

What language does the writer speak? You can effect a policy; you can't effect grammar. Aha, perhaps this is the clue; when the writer says 'grammar' s/he is talking about a bunch of prescriptions, which – like a policy – can be 'effected', I suppose. So if you're so lacking in confidence about your use of English that you want a bunch of prescriptions, follow @The_YUNiversity. Personally, I wouldn't bother. (I'd find myself disagreeing and arguing and blogging so much that I wouldn't have time for anything else.)

Another lousy/strained example. Just for clarity, the effect of your writing may be affected by ignorance of certain grammatical prescriptions. Grammar itself doesn't affect anything/

PS Before anyone actually goes to BNC to check my figures, I must 'fess up' to a peccadillo: I took the figures from my May 2013 post on trust. I hadn't at the time of writing got to grips with the search syntax, so while my overall figure was right ( '22,887 case[s] of effect '), I'm really not sure where my 'of which a  mere 137 are verbal' came from! I thought maybe that I had guessed that any verbal case of effect would be followed by a noun. But no: in that case, I would have searched for effect [n]and got the number 199. Perhaps I started with those 199, trawled through the results – and found 62 exceptions. I don't know; it was a long time ago.

PPS Using the right search syntax for this case   – [effect].[v]–  you get a figure of over 6% for verbal uses of effect in BNC; again, a far cry from the alleged '1%'. In fact, the difference is an order of magnitude greater that I first thought – 6x versus 0.6x. The verbal use of  effect  is A GOOD DEAL more common than Grammar YUNiversity claims. As Einstein  [I think it was him] said, explanations should be made as simple as possible and no simpler.