The Phrase Finder refers, not without a certain scepticism (or do I mean sepsis? [it being rather poisonous]), to CANOE – the 'Committee to Ascribe a Naval Origin to Everything'. And I bet the author of that [ahem] jibe wasn't a native of the UK (where it is hard to be more than an hour or two's drive from the sea). The average UK resident is much more likely than the average USA resident to look to the sea for a source of metaphor.

To go somewhere in a boat was, in Latin, navigare.


<autobiographical_note date_range="1963-1964">
I doubt if a rowing boat was big enough for a word that takes as much pencil as that, but navigare was in the first conjugation, so in my first year I remember the Latin master making us sing Michael ad oram naviga, alleluia. [Eat  your heart out, Pete Seeger.]
</autobiographical_note>


'Navigate' has acquired all sorts of non-naval metaphorical uses. Navigating is quite often a question of simply finding your  way. Indeed, although it may have been people at sea (at sea) who first used GPS, it was road-users who made the word 'satnav' really take off. It's a shame that Collins haven't included it yet in their online dictionary – as  they have, for each word, a graph like this: 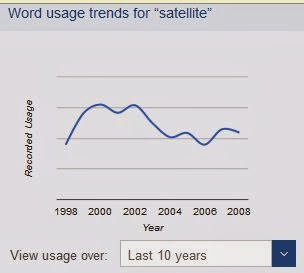 My guess is that it would show a huge increase in recent years. It is interesting (not to say, at first glance, paradoxical) that BNC (latest entry 1994) has 11 entries for 'satnav' – none of which refers to navigation by road – while the more recently compiled COCA (collected from texts dating from as late as 2012) has a  single one (again not for roads – but at least not relating to the sea). I expected more in COCA. But the term 'GPS' has more than 3,000 hits – demonstrating American English's preference for technical abbreviatons (e.g. 'cell' for 'mobile telephone', 'an SMS' for 'a text message' [note the article, the point is that in this usage 'SMS' has become countable, and 'an SMS' is short for 'a message that conforms with the specifications of the Short Message Service']...).

Today, we navigate through computer menus. It's really a very flexible word.

And sometimes, having left the sea, it returns there in metaphor. A government [now there's a juicy digression: gubernator/ 'rudder'... no, no time] may steer the ship of state through choppy waters, or just navigate though those straits.


<autobiographical_note date_range="1981-1983">
I am reminded of a pun whose memory I have cherished for years, which may have been the first sign of my lack of serious application (which led in due course to an amicable parting of the ways). My manager was out of the office and his boss wanted to know where and why. 'What did he say about the ship of state?' he asked. Quick as a flash I said 'Frigate' (which was more or less true, given his attitude to the hierarchy, though it won no prizes for oleageneity).
</autobiographical_note>


Earlier this year, I was listening to a concert in St Barnabas Church thinking, as I looked up at the vaulted roof, about the word 'nave'. I knew (I'm not sure where from, though it's not a particularly long stretch to use a 'ship'-metaphor for the long thin part of the building) about the derivation from Latin navis. I knew it, but didn't think much of it. I was thinking of an upright ship.  But it wasn't until that moment that I realized what an apt metaphor it was. That church (and I've looked in vain on that site for an interior photo of the roof†) felt just like an inverted ship – or an upturned fishing boat on a beach.

<fragment>
Not sure where this comes from  – probably another post about naval-based metaphors; at any rate, it doesn't seem to belong here:

a shot across the bows combines the sea with that other most prolific generator of metaphor  – armed combat discussed here and tangentially [how else?] here. And elsewhere, probably... Yes, here, and... [etc etc ad nauseam {and please God not NAUSEUM, which is un ubominution.} ]
</fragment>

One last thought about navigating. The people who dug canals or laid railroad tracks were  called navigators. The word was becoming more and more used throughout the end of the 18th century. It was not until 1832 that the abbreviation navvy started to catch on. Today, the word 'navvy' evokes an image of a pick-axe rather than a theodolite.

A condition of the Macmillan Education Award for New Talent in Writing is that submissions should not have been commercially published. So the complete version of #WVGTbook (V5.0) will be ephemeral. It will become available shortly, and be free to download for five days. Then it will go into purdah for a few months. So stand by your beds... † I went to another such prom yesterday, and took this photo (with apologies for the quality – which does no justice to that beautiful building: visit this website for some proper photos): sitting under that, couldn't you just hear the 'cello tune from that scene  in the first Pirates of the Caribbean film (you know, the one worth watching) when Jack Sparrow is getting across a beach unseen by crawling under an inverted dinghy.