On the day before the Great Twittopause (that is, on Saturday 3 August) I went to the second open day of the year at the Silchester Excavation. On the guided tour, led by someone whose name I didn't catch (but it was the 10.00 tour, if that helps anyone place her –  a lucky lady who knew her stuff and loved her work), we learnt of the Victorian excavations of  the 1890s, one part of which dealt with Insula IX:


Insula IX was first excavated in 1893, the fourth season of a twenty year project by the Society of Antiquaries of London to excavate the entire Roman city of Calleva Atrebatum (Silchester).

When I first visited Silchester (probably a few years before the Town Life Project started in 1997, I dismissed the word insula as just a hi-falutin' way of saying 'bit' – the sort of grandiloquent affectation that would have appealed to the Victorians; my grandfather, whose boyhood and adolescence almost exactly coincided with the Society of Antiquaries of London's programme of excavations from 1890 to 1909, would have loved a posh word like that! He (despite the keenness of his interest in horticulture) insisted on pronouncing buddleia with what is known in some circles as a 'honeypot', like the u in Buddha (/ʊ/).

But I may have been wrong. In fact one online Latin dictionary gives 'island' as the secondary meaning of insula. The primary meaning given there is 'apartment house'. 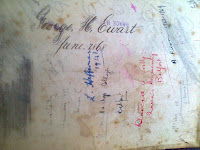 Turning to my well-worn paper dictionary (missing its title page, so I can't give a reference – but the earliest handwritten date on the inside cover is 1868, which would have made it current at the time of the Rev. J.G.  Joyce's earlier Victorian excavations between 1864 and 1878).

This dictionary gives this definition for insula: A house not joined to the neighbouring houses by a common wall.... Sometimes the term insula (sic – no change of font, which was a bit of a faff at the time [we blasé users of ctrl/i don't know we're born

]) was applied to several such houses, if adjoining and the property of one proprietor.


This is getting nearer to the Silchester usage of 'block', though it is used here (at Silchester) in the sense 'city block' rather than 'apartment block'.

Still, I didn't set out to quibble about the usage of Insula. I mentioned the Victorian excavations because they were timeless, as archaeology at the time had not discovered the principle of stratification (the dating of layers). As far as the Victorians were concerned, if a building at Silchester was made of stone it was contemporaneous with all other stone buildings; and any building not made of stone was not worthy of consideration.

In the early 16th century English acquired the verb 'insulate', in the sense 'make into an island' (Latin insula.) About 2½ centuries later a word came into English, via French isolé and earlier Italian isolato; 18th century English tacked the suffix -ated onto the French borrowing (initially the English word was just isole).

But where did the Italian isolato come from? No prizes for guessing it was Latin (in fact it's not clear to a philologist what 'Italian' meant that long ago†). The word was insulatus, 'made into an insula'. So the English words 'isolated' and 'insulated' both owe their origins to the Latin insula. But we can only trace their separate stories because historical dictionaries have sorted out the different layers; for a Victorian archaeologist the language they could see was just a mass of words with no precedence or history.


†The idea for a future post has been flirting with me for a while. Not long now, I fancy, before the consummation.

PS Yesterday, in my haste to get the metaphorical 'Victorian archaeologist' out there, I skated over an interesting difference between the history of linguistics and that of archaeology. My last line – 'for a Victorian archaeologist the language they could see was just a mass of words with no precedence or history' – was particularly misleading. In the history of linguistics the Victorians were most punctilious. And perhaps the distinguishing feature of what they did was that their studies paid particular attention to 'precedence [and] history'; the word I learnt to use in my History of Linguistics course was 'diachronic': their interest and studies were diachronic.

So the progress of linguistics, from comparative history (philology) to what-there-is-now – 'a mass of words' – is in a sense the reverse of what happened in archaeology. The Victorians unearthed a mass of buildings that were either presumed to have existed at the same time or whose 'precedence and history' was considered insignificant and/or unfathomable. The modern archaeologist has an awareness of the different strata that give clues to what happened over time; the Victorian linguist (who would probably have called himself – sic, almost certainly – something like a 'philologist') had an awareness of just that).

Freebies (Teaching resources: just over 44,100 views  and well over 6,000 downloads to date**. They're very eclectic - mostly EFL and MFL, but one of the most popular is from KS4 History, dating from my PGCE, with over 2,250 views and nearly 1,000 downloads to date. So it's worth having a browse.)