Neither, actually. I have often taught students who treated 'funny' as though it meant 'having the attributes of something characterized by fun'.

There is  a rule (in the sense of a 'TG rule', mentioned previously here) in English that lets you create an adjective by adding y to certain nouns: fog → foggy,  mirk →mirky,  rock →rocky... and so on; even, if you have a historical dictionary,  hap → happy . When someone is learning a language, this sort of rule can run amok, which is why my foreign students use 'funny' in this way.

Incidentally, the same applies to people acquiring their mother tongue. One of my children, who I won't identify to spare his blushes whoops, blown it, oh well did this with buzzer, coining a brilliant new metaphor that has entered the family sociolect†. Instead of 'I have pins-and-needles in my foot' he said 'I've got a buzzery foot'.

†This word has been bothering me. It ('sociolect') is a recognized term used by linguists to refer to a language shared by a number of people with social (e.g. work) links. But it isn't entirely satisfactory both intrinsically (it mixes Latin and Greek – which isn't a crucial flaw; many words do – television , for example) and in this case (the links are not just social). What I want is something that refers to the household – the όικος (which is where we get economics [think of 'home economics'], ecology, and so on). So there's the word: 'ecolect'.

... I have two things to add on the subject of this adjective-forming rule. Many of the people in this place have English as their mother tongue, but not the person who produced this sign on a flimsy piece of woodwork:

But coincidentally I heard a counter-example on the ferry home. A father said to his child: 'Hold my hand. It's a bit rocky.' I think this is exceptional (the sort of thing that native-speakers can get away with  –  the sort of licence unfairly denied to ESOL students.). Making allowances for the limited vocabulary of his child, the speaker was using the Add-a-y-to-a-known-word  rule in a way that a mature speaker probably wouldn't.

And here's the answer, supplied by a charming coaster: 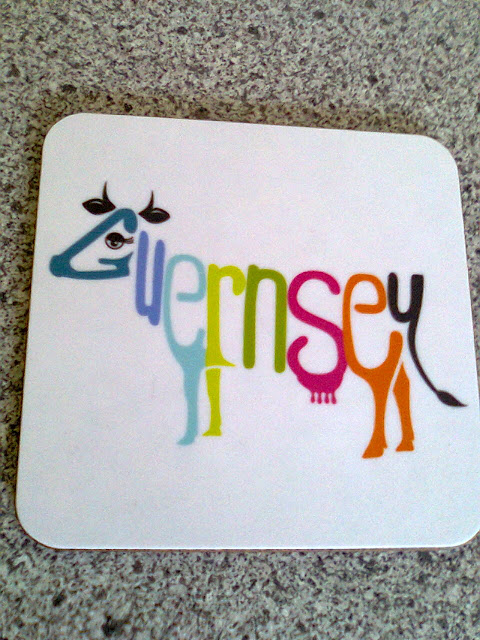