How are the mighty fall'n

I don't know why I put that apostrophe in there; it just seemed appropriate, as I've been thinking about the hymns we True Believers used to sing, in particular at Wednesday afternoon Benediction, which my primary school used to go to every week (in a crocodile – sort of forerunner of today's much more right-on 'walking bus'). And that is where I first met a word that I met again this week, when I was trawling through the -ia- words. (Perhaps that's the only time I've met it...):


The word suppliant is  little-used. The BNC includes only 13 hits, 6 of which were nouns (an alternative to supplicant, three times more common, at 18). Its rarity made me expect,that the Macmillan English Dictionary for Advanced Learners might not include it. But it does. To justify my lack of confidence in it, though, the voice sampled does not follow the transcription supplied. To quote an as yet unreleased note in my work-in-progress version of When Vowels Get Together:


compliant
This may be, by mistaken analogy, the explanation of a mispronunciation in the Macmillan English Dictionary, which correctly transcribes suppliant with the vowel sound /iə/ (so that the word is excluded from the list at the beginning of this chapter, since '-ian' is such a common ending). The audio sample, however, provides a mispronunciation, with stress on the second syllable: /sə'plaɪənt/.


But what about those fallen mighty? In the late '80s, or possibly the early '90s (anyway, over 20 years ago) we visited Cliveden, and MrsK and I went there again yesterday. I had a vague memory of a big tree named after a notable person who used to sit under it with a view of the Thames – something like 'Macaulay's Oak', I guessed.Well I got the species  right, but not the notable person:


Given its state twenty years ago its present state should have caused no surprise. It stayed more-or-less upright until 2004, but here it is now: 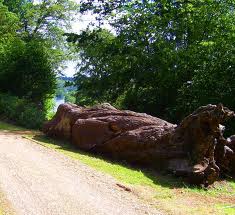 No surprise, but it did bring to mind David's words, first represented in the Great Bible as 'Oh howe are the myghtie ouerthrowen' but more familiar in the King James Version's 'how are the mighty fallen'.

Mammon (When Vowels Get Together V4.0: Collection of Kindle word-lists grouping different pronunciations of vowel-pairs – AA-AU, EA-EU, and  IA-IU, and – new for V4.0 – OA-OU.  If you buy it, contact  @WVGTbook on Twitter and I'll alert you to free downloads of the forthcoming volumes; or click the Following button at the foot of this page.)
And if you have no objection to such promiscuity, Like this.

Email ThisBlogThis!Share to TwitterShare to FacebookShare to Pinterest
Labels: apostrophe, autobiography, BNC, corpora, History of English, punctuation, When Vowels Get Together - progress