But NObody says /potahto/

My text for this morning's Harmless Drudgery is the Oxford Dictionary for Writers and Editors: 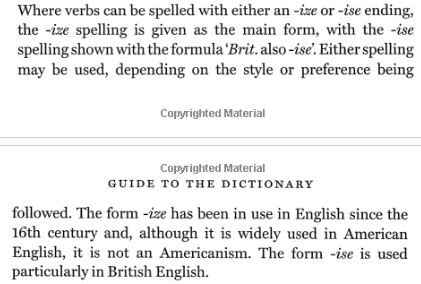 The rival claims of -ise and -ize spellings have been argued with varying degrees of heat for centuries. Sadly, the ubiquity of software that checks spelling and grammar has recently dealt what may in the fulness of time (but over my dead body!) transpire to be the beginning of the end of -ize  spellings in British English: 'The infernal machine says I can't spell that way and retain my UK citizenship. Oh well'; and we appease the majority opinion holders. Today, most ESOL teachers say things like '-ise is the standard spelling in British English' (this quote is somewhere in the UsingEnglish forums, verbatim - though I can't at the moment find chapter and verse). Less well-informed commentators go so far as to say - when asked the difference between authorise and authorize -


No difference at all ... only that americans spell it different cos they feel the need to be different . The correct spelling is with an -s-


Oh dear. In one such discussion I said


There's nothing unBritish about the spelling 'apologize'. It has been the house style of The Times for well over a hundred years, and is used by many large and influential publishers (Oxford University Press, for example). I'm tired of being accused of flirting with modernity and excessive American influence, just because I use a spelling that millions of British people use (so long as they haven't been got at by generations of school-teachers peddling misinformation).

That may have been true of The Times at the time of writing, but 'the times they are a-changin''. A few cases of '-ize' pass the scrutiny of the subs' eyes - especially when there is a strong etymological justification - as in the case of 'baptize' (where there is a zeta rather than a sigma in the original Greek); but fewer and fewer.

The important word in that ODWE quote is the first - 'Where'. Sometimes there is not an option. Words such as 'televise', 'demise', 'enterprise'... (the indispensable - or should that be -ible? -
Hart's Rules: The Handbook of Style for Writers and Editors  lists over two dozen) can only be spelt -ise. And this is true of American English - although naturally there is more tolerance for a wrong -ize ending in these words in a national variant that generally prefers -ize.

And in the -ise/-ize war, certain innocent bystanders have been caught in the cross-fire; words such as 'analyse', with no sensible justification for a z (biased, moi? - well, I am influenced by etymology [there is a sigma in the Greek] though not totally in thrall to it) have an s in British English and a z in American English. As Hart says:

Incidentally Alistair Cooke insisted that the correct pronunciation of  'intelligentsia' used [g] because English had borrowed it directly from Russian. Imagine the problems if we tried to impose the same standard in the case of -ise/-ize. In that 'authorised/authorized' discussion I mentioned, one contributor pointed out '[A]uthorize and authorise come from Old French autoriser which comes from Medieval Latin auctorizare.' For each word we'd have to know not only its root but also the route that it took to get into modern English. A distorted and inverted form of this belief - as it happens - was the justification for Professor Richard Cobb's dispensation from the OUP's house-style favouring -ize endings where possible. He was a Francophile, and for him even words like 'baptize' - whatever their origin - were seen through a francophone filter: if it was  -iser in French it was -ise in English.

But, to quote myself, bowing out of another discussion,


In some cases (very few) '-ise' needs to be used instead of '-ize' in Br Eng spelling; and (invariably, I think) '-yse' instead of '-yze'. AmE ironed out these exceptions; so Z spellings are characteristic of AmE. But they're not exclusively American. (I can explain the exceptions if you want, but I think people's eyes would start to glaze over.)

In time (several centuries) it may become true that -ize spellings become unacceptable in British English, but this Cnut will always have his finger in the dike.


Update 2014.07.07.11:40
PS  This post reminded me of the usefulness of a knowledge of etymology in matters of spelling; the @Pronuncian piece is about pronunciation, but the two are related (to varying extents – and depending on how deeply embedded a borrowed word is).


<digression>
I have mentioned this 'embeddedness' issue before  – here:


/u:/ is preceded [in British English] by a glide [j], becoming [ju:] in largely predictable contexts – at the beginning of a word, after stop consonants (/p t k b d g/) , after the sonorants (/l m n /) and after /h/ and /s/. The very recent borrowing 'gulag' keeps its native Russian pronunciation (as far as the 'u' is concerned; pronunciation of the consonants and of the 'a' is a different matter!) Similarly, the name 'Putin' (in an English-speaking context) has no glide before the /u:/, whereas the name 'Rasputin' – borrowed, for the use of English in less linguistically sensitive times – has a /ju:/. (The singers of Abba were unaware of this!)

I said 'USEFULNESS of a knowledge of etymology'. By this I don't mean indispensability. In fact, this is often a matter of differentiation; some students will benefit more from (and be more interested in) a knowledge of etymology. For example, I had a Spanish student who wondered why 'symphony' (sinfonía) had a y whereas 'philosophy' (filosofía) had an i. She was a classics student. So my saying that English spelling reflected the etymology (υ versus ι in the Greek original) clarified hundreds (maybe thousands) of apparently arbitrary 'i versus y' spelling quandaries. But this etymological insight would not have been useful in a full class context (although it might be tempting for the  exhibitionist teacher eager to show off his knowledge